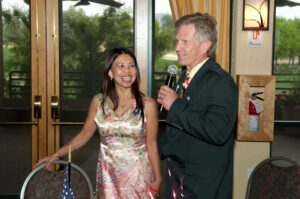 Guy Phillips, a Scottsdale resident for 27 years, is seeking his third term on the Scottsdale City Council. He has become an integral part of the Council championing fiscal responsibility and efficient delivery of city services. Guy also supported the Yes on 420 campaign, and recently served on the Capital Improvement Projects subcommittee which put forward the 2019 bond package. He served as Vice Mayor from 2013 – 2015.

Guy was raised in a blue collar household in Phoenix and learned the value of hard work. At age 10 he had his own paper route and saved enough money to buy his first car at age 16 – a 1970 Mustang Mach I.  He worked in various restaurants (Asst Manager Sambos) until graduating from Camelback High School in 1977.

He painted murals and Christmas windows for business owners in his spare time while attending Maricopa Community College.  Guy left school to work for an AC company and joined the Sheetmetal workers Union Local 359 where he learned the HVAC business.  He started his own air conditioning contracting business in 1982 which he still owns and operates today – Budget Mechanical Llc. Guy also received a general contractor’s license and built homes from 1997 to 2003.  During that time, he also was a licensed realtor and member of the Scottsdale Area Association of Realtors (SAAR).

Guy is currently a member of the Better Business Bureau, the Heritage Foundation, the National Rifle Association and along with being a city council member is a current board member of the Scottsdale Philharmonic, Parada Del Sol Foundation, Tbird 2 Foundation (Thunderbird fields) and Experience Scottsdale. Guy recently received a Certificate of Achievement from HarvardX on American Government.

Councilman Phillips is an amateur artist and published writer (Of Courage & Character) who likes to rebuild classic muscle cars in his spare time. He has created many start-up businesses with a patent pending. He is a firm believer that small business is the backbone of the country, and has mentored others through the business process.

Guy met his wife Cora in Scottsdale back in 1995 and the two were married at City Hall. Together they have raised five children (give Cora the credit!), all of whom attended Scottsdale public schools.

Guy Phillips ran for Scottsdale City Council in 2008 and was elected in 2012 and reelected in 2016.  He ran on a platform of accountability, fiscal responsibility and quality of life and holds these ideals near to his heart.  Guy is a Tourism cheerleader and promotes Scottsdale every chance he gets.

Even though I was raised in Phoenix, I always looked towards Scottsdale as the Golden City and She has never let me down. I am proud to be of service to this great community